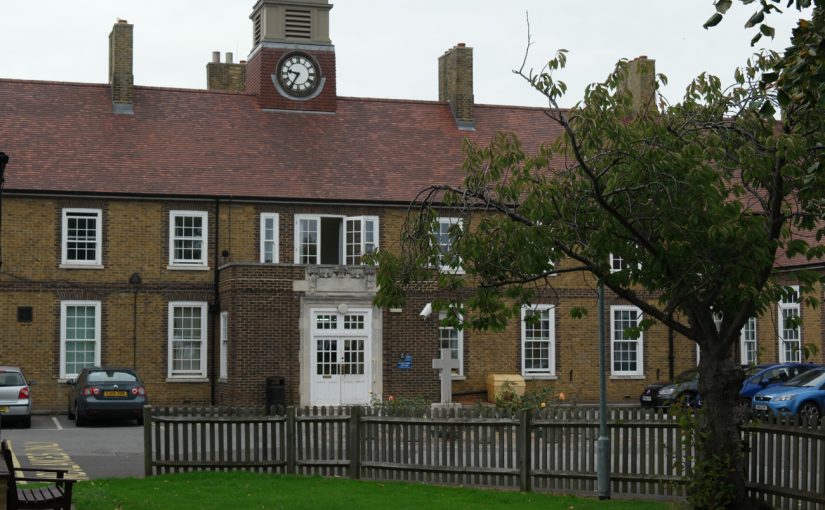 The Victoria Hospital was built in 1919 and opened officially in 1924 as a memorial to the men from Deal and Walmer who had lost their lives in the Great War, and their names are inscribed on two large wooden panels inside the front entrance.

The history of hospitals in Deal & Walmer is an example of how people can work, maintain and improve  a facility for the benefit of the community. The origins of a hospital in Deal were very humble with two rented rooms in Beach Street giving free medical treatment to the poor and necessitous.

In 1861, a bequest of £500 by a Mrs Oldham, supplemented by her sister, enabled a suitable house in Wellington Road to be adapted which become known as the Deal & Walmer Dispensary & Infirmary. These premises consisted of one paying ward for casualty cases from ships in the Downs beside the Dispensary.

In 1897, a public subscription raise £1077 enabling the building to be reconstructed and made suitable for use as a public hospital. In honour of Queen Victoria’s Jubilee it was renamed the Deal & Walmer Provident Dispensary & Victoria Hospital. A year later, a new wing enabled the whole of the nursing staff to be housed within the hospital and provided increased surgical accommodation.

In 1912, altered conditions brought about by the Health Insurance Act to Public Medical Services saw the Dispensary closed and the name changed to The Deal, Walmer & District Victoria Hospital. In the same year, to commemorate the late King, a Children’s Cot was endowed (again by public subscription) and called the King Edward VII Children’s Cot.

In 1923, with the rapid advance in medical & surgical treatment, the buildings had become inadequate for the demands being made on them. As a permanent memorial to the men of the district who had given their lives in the 1914-18 war, it was decided to build a new hospital in the London Road. This was to be for the whole of the neighbourhood, especially the dependents of the fallen.

Enthusiasm for the project secured the funds and it was officially opened on 17th March 1924 by Prince Henry (the Duke of Gloucester) as the Victoria Hospital, the Deal, Walmer & District War Memorial. It consisted of 25 beds, a Dispensary, Casualty & Operating Theatre with a nursing staff of 11 and 6 domestic workers.

By 1948 when the hospital passed into the jurisdiction of the National Health Service, there were 55 beds and the hospital had Physiotherapy, Casualty, X-Ray and Dental departments. The Outpatient Department included the first Radium treatment clinic in the County (begun in 1929). An 8 bed children’s ward was added in 1953.

With reorganisation in the late nineties, the whole building was altered. The two main wards were converted into the Physiotherapy & Outpatients departments. Casualty, was renamed the Minor Injuries Unit and moved to a new site next to Physiotherapy. From 1st April 1999 there were 36 beds with a staff of nearly 90.

During the whole of their existence, the hospitals have received wholehearted support from the local population. Money has always been forthcoming when needed either by public subscription, outright gifts, legacies or from the myriad methods of fundraising.

During the life of the Wellington Road Hospital, the ladies from the Dames Homes formed a working party which mended and kept in repair all the hospital linen and this work was continued in the London Road Hospital by the Ladies Association.

In 1999, a commemorative cover was produced by members of the Deal Philatelic Society and sold to coincide with the Patients issue of Royal Mail stamps and the 75th anniversary of the opening of the War Memorial Hospital in March 1924 which has served the local people so well.

Today the voluntary and philanthropic support for the Hospital is continued by the League of Friends and the annual Hospital Fete is one of the highlights of the summer.

The League of Friends has given more than £1.6m to Deal Victoria Hospital. Please support the work we do by joining the League of Friends. Joining is easy! Just download a form by clicking the image below and make your donation by cheque. If you are a taxpayer then 25% can be added to your gift through giftaid. 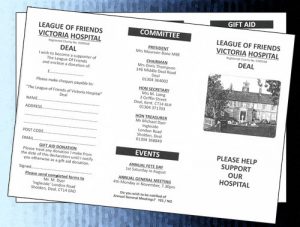 Remember us in your will

Many people wish to show their gratitude to the hospital and choose this way to show their appreciation by leaving a legacy to the League of Friends in their will.

A legacy left to a registered charity is not included in the valuation of an estate for inheritance tax purposes. If this is of interest to you it is suggested that you consult your solicitor.

I had to attend minor injuries with an achilles tendon injury, excellent care given from receptionists to medical staff. promp referral

I only have praise for the minor injuries department. The staff are so knowledgeable and caring. We are lucky to have them. 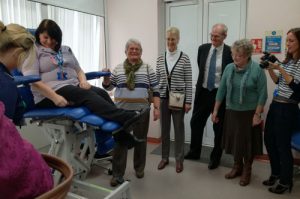 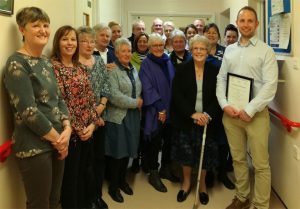